How Lightning’s Location and Intensity Can Impact Your Claims

In 2019, 62% of claims assigned to StrikeCheck had lightning as the stated peril, making it the most frequently claimed cause of loss, according to the 2020 StrikeCheck Annual Claims Report. To recognize why lightning might appear so much in property and casualty insurance claims and why it’s important to verify if it occurred at the time of loss, adjusters should understand how lightning forms, different types of lightning, and where it’s most likely to happen.

In its simplest definition, lightning is an electrostatic discharge formed by a charge imbalance. It can occur within the clouds or travel from a cloud to the ground. 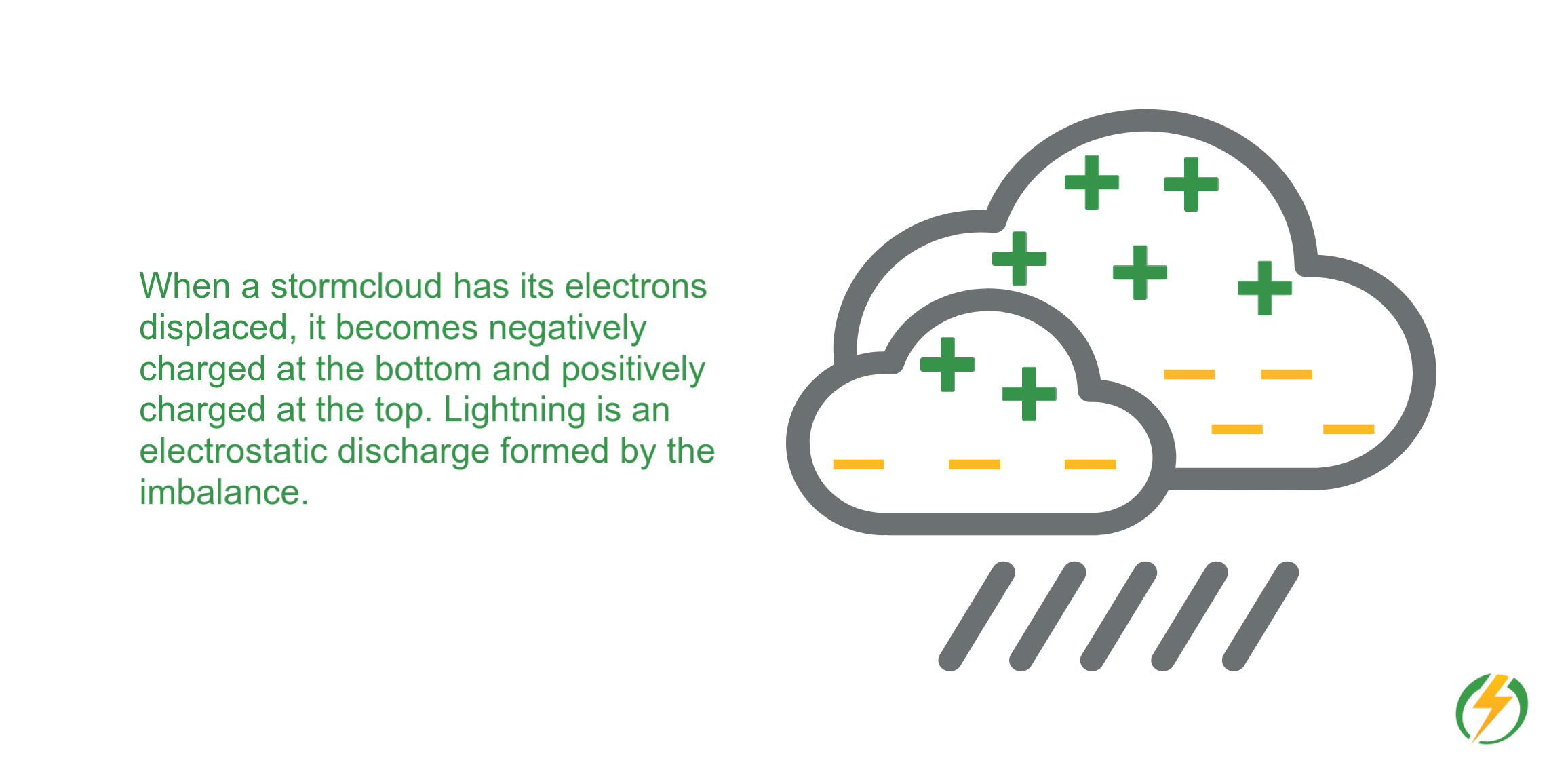 Within a thunderstorm, strong updrafts cause water droplets to go above freezing level and turn to hail and ice, and downdrafts move the hail or ice to the lower part of the cloud causing water droplets they collide with to release heat. According to the National Weather Service, when this warmer hail hits other water droplets and ice particles, electrons are displaced. This results in a negatively charged base of the thunderstorm and a positively charged top. The surface of the Earth under the cloud will also become more positively charged. As the charges build up, an electric field is created, but it’s stronger within the storm clouds; therefore, more than 75% of lightning will take place within the clouds.

Negative lightning occurs when negative charges at the base of the storm cloud travel toward the ground in a “stepped leader” and the positive charges in taller ground objects travel toward the negative charge in a “streamer,” according to the National Weather Service. When these channels connect, there is an electrical transfer. Negative lightning usually has two or more discharges, or strokes.

Positive lightning, which typically only has one stroke, originates in the more positive upper portion of the thunderstorm. In this case, the stepped leaders are positively charged, and the streamers are negatively charged when they collide. This leads to a net transfer of positive charge from cloud to ground. While positive lightning occurs less than 5% of the time, it is more dangerous than negative lightning because its electric fields are stronger, its flash duration is longer, and the peak charge is up to 10 times greater than negative cloud-to-ground strikes. Another characteristic that makes this different – and more dangerous – is that positive strikes can occur more than 25 miles away from precipitation.

Lightning can also change its charge with polarities going from positive to negative, which is known as bipolar lightning. It has similar characteristics of the other forms.

Areas with the Most Lightning Strikes

Earth Network tracks when and where lightning happens for early thunderstorm and lightning warnings. And while it has the potential to occur anywhere at any time, some locations have lightning more often than others. 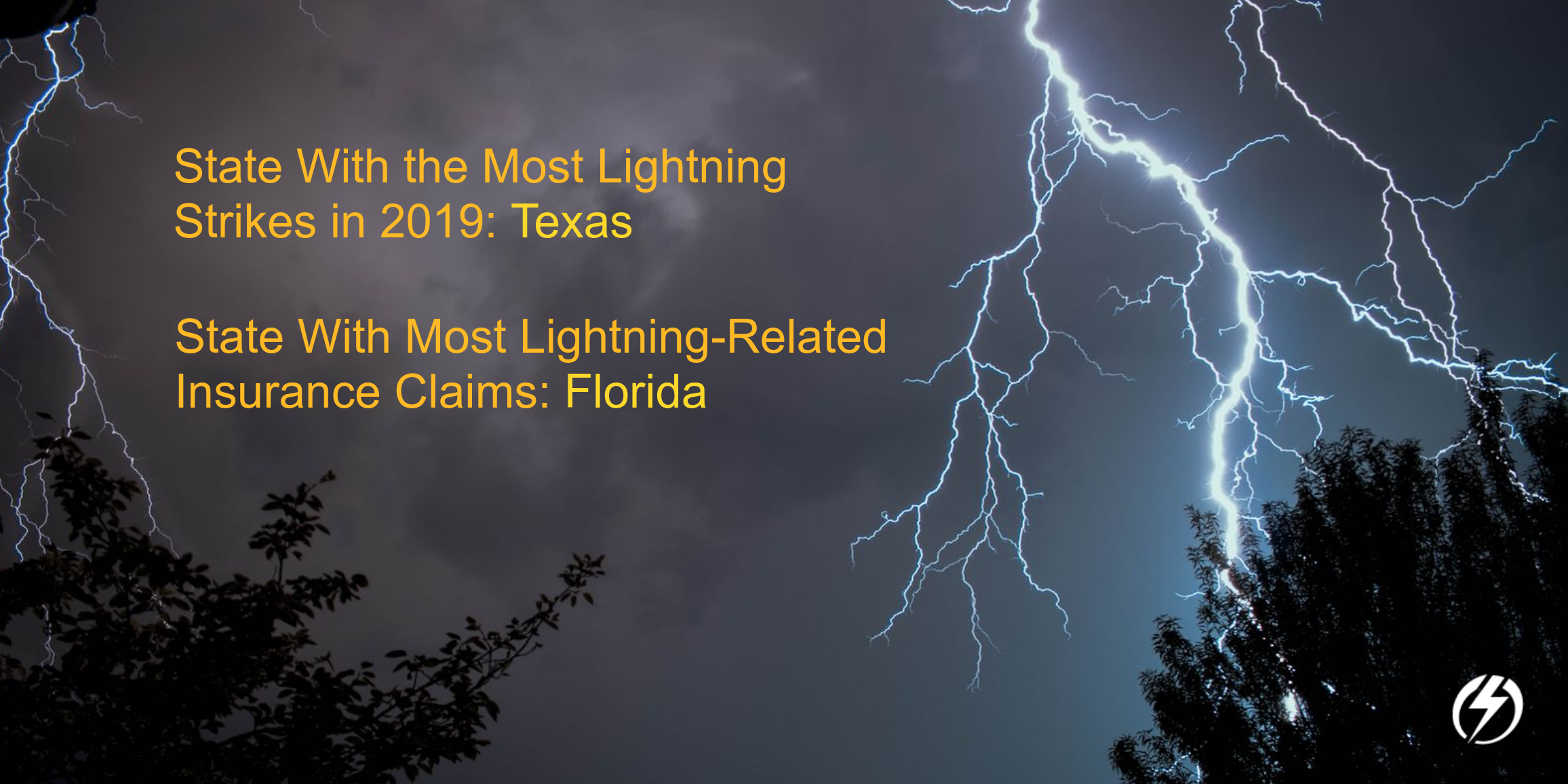 The 2019 Earth Networks Lightning Report compiled the top 10 U.S. states with the most lightning strikes in 2019.

Leading the list was Texas with more than 16 million – nearly double that of the second-leading state. Kansas saw 8.3 million lightning strikes; Nebraska, 6.1 million; Oklahoma, 6 million; and Florida rounded out the top 5 with 5.2 million. The 10th state with the most lightning strikes in 2019 was New Mexico with 3.4 million, just slightly less than what Colorado saw.

These numbers depict total lightning data, including cloud-to-cloud and cloud-to-ground, which means most of these strikes never actually touched down.

The Insurance Information Institute studied lightning strikes that did impact people by tracking the number of lightning-related claims settled in 2019. According to the III, more than $900 million was paid out to nearly 77,000 policyholders in 2019 because of lightning claims. There were 76,860 lightning claims in 2019, compared to 2017’s 85,020; however, the average cost per claim increased from $10,781 to $11,971 over the two years.

Know if Lightning Was Present

Lightning can trigger damage to many items in a home or business, including electronics, appliances, solar power equipment, or outdoor electronics, because it can travel through the ground, wires, and pipes. Indirect lightning can also lead to surges that cause damage but may not be covered by the insurance policy.

Lightning verification reports are a tool adjusters can use to help settle lightning-related claims, regardless if they happen in lightning-prone areas or not. These reports could confirm or exclude lightning as the possible cause of loss, which make it easier to settle claims more accurately.

When using lightning verification reports, it’s important to obtain certain information. Detailed maps can show how far away lightning occurred from a policyholder, but intensity also makes a difference. If lightning at a lower intensity was too far away from a policyholder, it’s less likely to be the direct cause of loss. An indirect strike or a resulting surge could be more probable, and further assessment may be necessary. 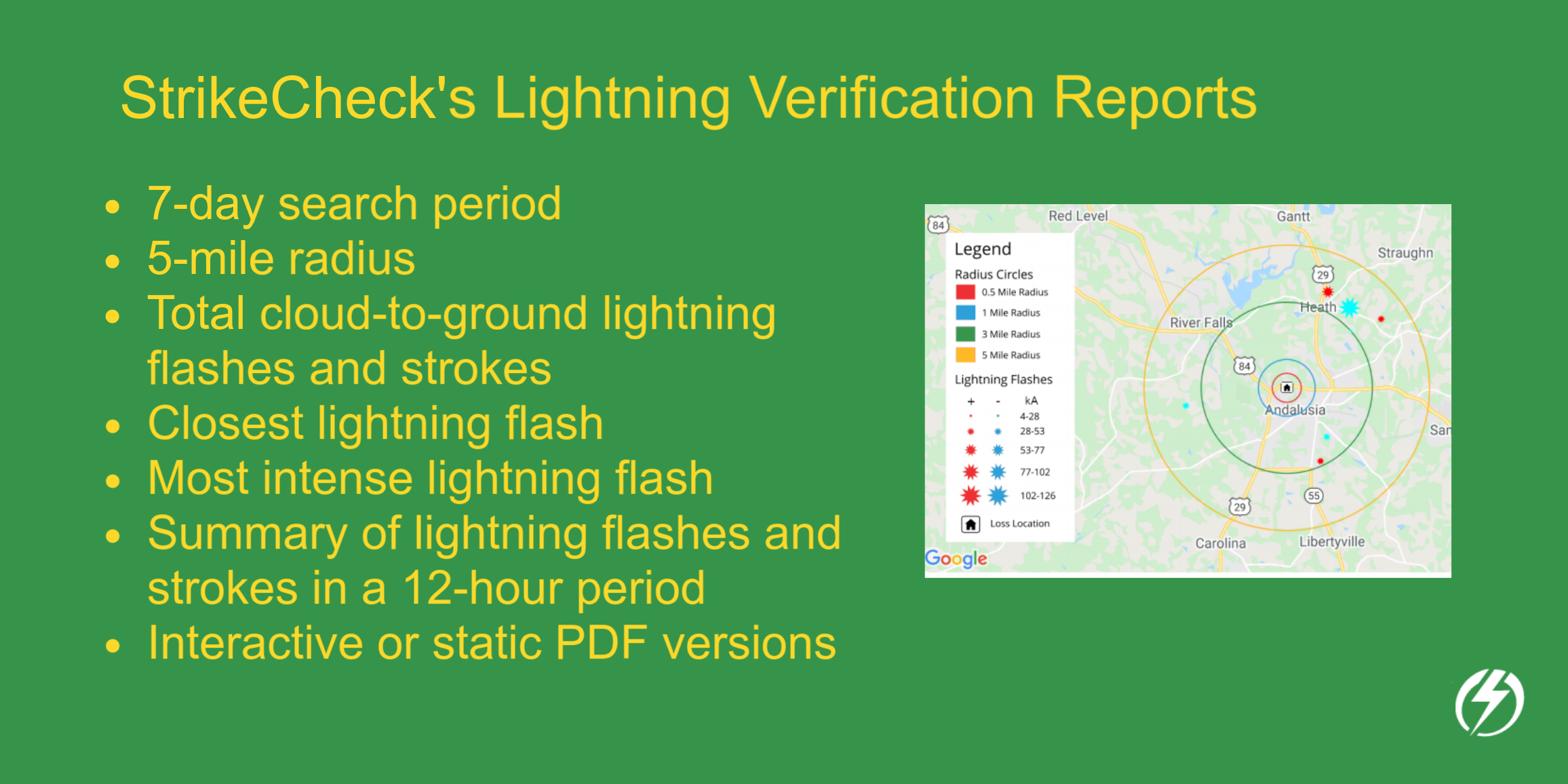 Having this data at their fingertips allows adjusters to easily and accurately verify or exclude lighting as the cause of loss for lightning claims. Plus, adjusters don’t have to do anything with the claims until we provide the necessary information, which will decrease the time they spend on them.

Track where lightning occurred on your next claim that lists lightning as the peril.