Although most of the time electric consumption is steady, voltage irregularities happen more often than people would imagine, and with them come some big risks of repercussions to electrical equipment people frequently use.

What is a voltage irregularity?

Science Direct defines voltage fluctuations as systemic variations of the voltage envelope or random voltage changes, most of which don’t normally exceed specified voltage ranges.  They can be step-voltage changes happening regularly or irregularly, or the fluctuations can be cyclic or random based on variations in the load impedances. In short, voltage changes occur when the electricity flow is interrupted and restarted or when there is an increase or decrease of electricity in the system. 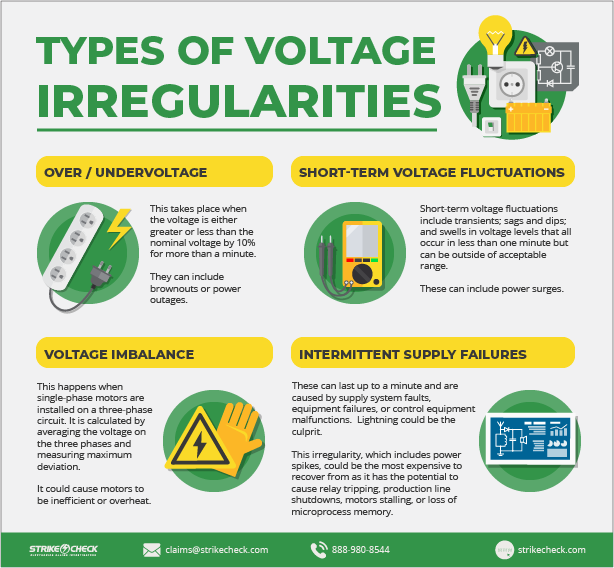 There are a few common voltage problems, according to Hershey Energy Systems.

How can voltage irregularities be damaging?

These voltage issues could lead to a variety of consequences.

Short-term voltage fluctuations above the acceptable power could cause insulation breakdown, overvoltage tripping, and overexcitation, according to Hershey Energy Systems. Not enough voltage could cause loads to drop out.

Intermittent supply failures, which could be caused by lightning, may have the most expensive outcomes because they could cause relay tripping, production line shutdowns, motors stalling, and loss of microprocess memory, according to Hershey Energy Systems.

The StrikeCheck 2020 Annual Report shows that consumer electronics, like personal computers, were the most claimed item in 2019, so let’s use them as an example for what voltage irregularities could mean to commonly used devices.

When a power outage occurs, most hardware on newer computers isn’t affected, but data could be lost, according to an article by Penny Electric.

A power surge, similar to an overvoltage, can happen when something that uses a lot of electricity, such as an appliance, is turned on or off.  How that affects other things on the same electrical supply could depend on when it happens and how big of a fluctuation it causes. Undervoltage can also cause slower motor speeds or computers to crash or freeze, leading to data loss. Too many small surges may cause damage to internal circuitry over time. 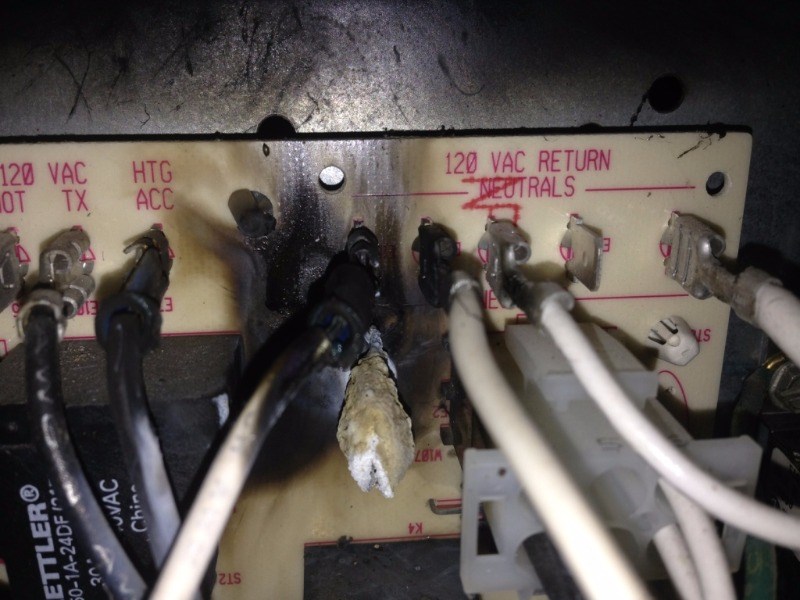 Power spikes, whether from a lightning strike or an increase in voltage, can destroy circuit boards.

But voltage spikes, the Penny Electric article continues, are “more severe and pose the largest potential problem to computers and electronics.” Happening when a lightning strike, tripped breaker, power supply failure, or a short circuit occurs, spikes cause the electrical flow to be greater than what the computer or electronic can handle, leading to destroyed or “fried” electrical insulators or circuitry.

Can equipment be protected?

High voltage spikes are the most damaging to electrical items, but policyholders can take steps to help protect their equipment.

Alliant Energy’s PowerHouse suggests simply unplugging items that aren’t being used, ensuring residential and commercial wiring is adequate for the electrical system, and checking for overloaded circuits — Don’t have two or more large appliances or too many seemingly smaller devices on the same circuit.

Surge protectors like this one can protect large or small electrical devices from bursts of high power, caused by lightning or other voltage surges.  Photo Credit: “Surge Protector” by Erin Boyle/ CC BY 2.0

Another way property owners can protect their electronics is through surge protectors, which look like power strips but offer voltage protection for cable lines or other electrical devices. Whole house surge protectors can also be installed on control panels to keep lightning strikes and high voltage surges from spreading throughout the house. Items that don’t use a lot of electricity should be considered along with equipment that has a higher electrical demand.

There are also ways to counteract when voltage supply isn’t high enough, according to PCMag. Voltage regulators maintain the voltage supply when it decreases, and uninterruptible power supplies are devices that offer a battery backup when there is a power outage or too low of a voltage level. They can supplement long enough to allow a person time to properly shut down a computer or other electrical device or to keep it running for several more hours.

What can adjusters do?

Lightning may have been a cause of electrical damage in a home or business, but there are also several other explanations.  One way to ensure you’re settling claims fairly is to have an objective expert, like those at StrikeCheck, provide a damage assessment to fully test the equipment and determine what caused the loss, see how many and what types of items were affected and to consider other potential underlying factors.  Our experts will recommend best practices to resolve an issue through repair or replacement.