High vs. Low Voltage Equipment and Why It Matters in Claims

Appliances represented nearly half of all equipment that adjusters assigned StrikeCheck to evaluate last year, beating out consumer electronics as the items most frequently included in claims. Damages to each category were often caused by high voltage surge, and adjusters should know how surge losses to high and low voltage equipment may impact potential settlements.

Why Does Surge Damage Occur?

To better understand which components are at risk for high voltage surge losses, it’s critical to know what causes this peril and what evidence experts look for when analyzing damage. Voltage fluctuations in the electrical circuit may occur regularly or irregularly and could last a few milliseconds or several minutes. These variations give electrically powered items more electricity than they can handle – or not enough. 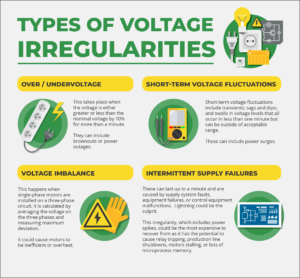 Voltage fluctuations occur for many reasons. These include:

Most appliances manufactured for U.S. homes use 120-volt outlets. Volts are the force that makes electricity move.

The wattage amount, the measuring rate of energy transfer, differs among various electronics and is calculated by multiplying voltage and current. A lightbulb burns brighter with more wattage, and appliances may require more watts, depending on their use. For example, a coffee maker may need 900-1,200 watts to run compared to a clock radio that uses 10 watts or a dishwasher that can use up to 2,400 watts. 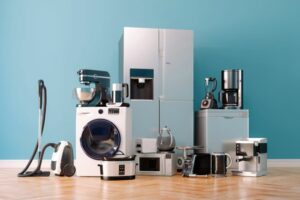 Large and small appliances use varying amounts of electricity, making some more susceptible to surge damage than others.

If a nearby lightning strike causes an increase in voltage to an electrical system, an item that doesn’t require as much electricity will be the first to be damaged because it can’t handle the increased power, whereas equipment that requires more energy to run may have little to no surge impact.

It’s important to note that while an expert can determine whether malfunctions were caused by high voltage surge, it’s not as easy to definitively determine what led to the voltage fluctuation. Lightning verification reports can confirm or exclude the presence of lightning at the time of loss but not pinpoint the surge’s source.

Scope of Damage Comparisons for High vs. Low Power Components

The disparity between items that can handle more electricity than others occurs within an appliance or consumer electronic, too.

Appliances, particularly as many become equipped with smart features, have vulnerable electrical controls. Among them are digital timers and custom temperature control settings. Control boards and sensors with circuits are low voltage components that don’t need as much electricity to run but are more susceptible to surge damage. They may have thousands of transistors, resistors, and capacitors, like a computer, that can all be easily damaged. 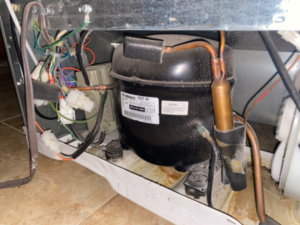 Refrigerator compressors, like the one shown here, are less susceptible to surge damage than other components, such as control boards.

The good news for both policyholders and insurance carriers is that individual appliance components can be replaced fairly easily. For example, a refrigerator with control board damage may need a simple repair of a new control board rather than a full refrigerator replacement.

Even when a mix of high and low voltage components require replacement, these repairs are often less expensive than replacing the appliance. According to the CCG IQ 2021 Annual Report, the average appliance replacement cost was $4,854, compared to the average repair cost of $1,602.

Consumer electronics and small appliances may not be as lucky. Sometimes the repair costs would meet or exceed the full replacement cost. This makes settlement for full replacement a better decision. An electrical expert would be able to recommend the best course of action while weighing repair and replacement market value costs.

Regardless of what wattage an appliance or consumer electronic uses, don’t settle for damages without confirming cause of loss and scope of damage. StrikeCheck’s comprehensive assessments can ensure you’re making accurate and timely claim decisions based on testing results and expert recommendations. Submit a claim to get the assessment process started today.

Learn about lightning surge through our adjuster eBook